A downloadable game for Windows and macOS

Bird of Passage is a free night ride across Tokyo.
By playing it, you will be granted access to the private conversations between a quirky passenger and the taxi drivers he will encounter en route.
Listen carefully and help him find his path...

Really great concept! I might consider speeding up the road a bit to match the speed of the lighting on the car, but I love the look.

Thank you for this game. I loved it alot. Was very fun to be patient enough to discover the truth of who i am and just love the vibes in a taxi ride in general. The music fits well too. I recorded it awhile ago but i still remember its story. It was memorable. Again, thank you alot for this game.

Reply
give it to dog139 days ago

I'm in love with this game. Just awesome. Thank you very much for this experience.

Really enjoyed this artwork. Simple experience but kept me hooked, impeccable and felt personal even though i have nothing in common with any of the characters. Thank you for the good trip.

I found this game back in the 2019 thanks to RagnarRox's video and out of all the games I played since then nothing has come even close to this gem when it comes to the atmosphere.

I really liked this game. Meditational storytelling through relaxing driving accompanied by a minimal, bitcrushed soundtrack made out of a few notes.

Gingko trees can be seen at temples all across Japan.  They're traditionally planted there to help protect the temple from fires, since they don't burn easily.

Really interesting graphic novel/game. While simplistic, it has beautiful graphics, art, and story. The writing is top notch and I like how the narrative slowly reveals itself. It does get slightly repetitive with all the cycles and I'm not sure if there's an actual ending to the game even after playing 15-30 minutes. But maybe that's the point of the narrative - that the player is trapped in an endless cycle and will never escape. Well done!

not sure if you realised afterwards but there is an ending to the game! the key is the third taxi

I enjoy this one a lot because the themes are dear to my heart. Chance encounters, night drives... Keep making awesome games please :)

Ever since Maddalena presented Bird of Passage/旅烏 and its development process at the Clash of Realities' closing panel last year, I've been looking forward to playing it. A beautiful game with a clever mechanic, and of course I cried in the end. Thank y'all for making it!

Is this talk available online? Is love to learn about the making of this game.

Thanks for asking, but unfortunately is not available online

"Beat" this game earlier this year but apparently never commented. This game is great and does so much with so little as you slowly unravel the mystery. I won't spoil it but I now know some world history that's fascinating on top of having played a great game! And it only takes ~45 minutes so it's short and sweet.

What a beautiful and poignant experience, and one that leverages the "I must replay a narrative game with choices over and over against to see all the options" as a core mechanic. I found how you feel the humdrum of the repetition to reflect the jadedness of the passenger quite poetic, and how each new piece of the narrative I uncovered made me eager to learn more, like I was getting closer to my conclusion, artful. I hope this demo remains available as its own piece after the full experience is released, because its brevity allows it to be something quite beautiful. With that said, I am a little concerned about the full release. While I found this experience poignant, I could definitely feel that if it were longer, it could definitely outstay its welcome. I hope that when the full version is released, it will have enough changed and added to warrant that longer playtime. But I also hope this version remains as its own experience.

Such a great surreal story, thank you for the interesting experience :)

Everyone is saying this was a calming game, but I felt so stressed because I couldn't see the connection between the text and how to progress forward: sometimes he simlpy got into the wrong type of taxi, or suddenly decided to stop telling his story, and there was no hint between what choices would actually talk about the key elements

The art style and the narrative were solid, and I really love the concept, but the way of putting together the puzzle was a little obtuse, and there was no real indication that I was heading in the right (or wrong) direction
The end of the game referred to the character as a Yokai, but he mentions that he was a human that died, so surely that's a Yurei (ghost)? (Forgive me if I'm wrong)

I enjoyed the nod to Italo Calvino, and the writing was generally quite easy-going (but sometimes came off a little melodramatic)
Seen as it says this is a demo, I'm interested to see what you guys do with the game from here. Keep doing cool stuff!

Thank you for making this game and sharing it, it helped me calmed down while I was anxious, and the last message made me warm. I'm happy they're okay now.

OOOH MY GOD. I had to make an account just to express how much this game made me feel at the end. I never had anything in my life that made sent shivers down my spine like this game did to me. I love it sooo much and I highly recommend it for everyone to play it. Thank you for the amazing experience. You my friend have inspired me to try to express myself via games and stories like this.

This game is amazing. It really made me feel calm and the visuals are so amazing as well!!

Didn't realize it was a puzzle game until halfway through lol. Very great game with very satisfying graphics, dialogue, and ending.

That was awesome i really got some emotions when he got to the tree, that was absolutely something really good

A spectacular example that video games are another form of art! I will be showing this game to friends and family regardless of whether they are normally interested in video games or not. Thank you!

I can't stop thinking about this, it definitely got into my head. It runs so smoothly from one ride to another that you could end up playing it forever. The mood is really something.

This is a poetic and beautifully melancholic game. I fell in love with this polygon like graphics first but the story was also amazingly told in such a short period of time. Since I’m from Japan, I had some ideas and could make connections with the story. However, I finished the game with spiritual impressions. I’m looking forward to play this kind of indie game again. Thanks for putting wonderful effort in developing this kind of game.

SUCH a beautiful game!

this game is absolutely gorgeous- in writing, visuals, and music. it's feels like an experiment in tone, and it hits the mark for everything for me. a contemplative experience, worth your time and attention if for nothing more than to slow down for a sec. great job guys!

Great game! It took me a minute to figure it out and get the ending, but I loved it!

Such a beautiful ending.

The game is very simple but it made me cry a bit. Recommend.

Reply
ShiroTheSorrow3 years ago(+1)
Heres my attempt, i didnt beat it tho ooof
Reply
CTAC_HARDBASS3 years ago (1 edit) (+2)(-1)

Didn't recognise it was a puzzle game until i read the comments. Still a very enjoyable experience nonetheless.

thx RagnarRox for recommending this in his video.

This was an eerie and yet relaxing sort of game that made me feel as though I were a phantom. It's somber atmosphere was calming and unsettling all at the same time. The story was simple but wonderfully executed. Lovely game♡♡

beautiful- didn't quite grasp the narrative puzzle on the first play through. But I did it on a stream and often deeper semantic meaning are lost with divided attention. It's a gorgeous game, with great dialogue. I'm looking forward to my second playthrough :D

I thought that the game was beautifully done, and really enjoyed it once I realize that it was a puzzle game. It's very peaceful and relaxing and I recommend it. I played this for my Indie Game Showcase and am leaving the highlight of the game play here. 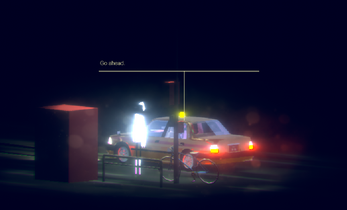